Fronting is the term used to describe the relationship between an admitted commercial insurance carrier and an unrelated captive that cannot directly write insurance coverage. Our key terms section defines fronting as:

Fronting – Most commonly refers to the practice of a non-admitted insurer (or an insured with a captive insurance company) contracting with a licensed insurer to issue an insurance policy for regulatory or certification purposes. This fronting insurer assumes little or no loss exposure; instead, financial arrangements are made to guarantee claims administration and payments. The fronting insurer is usually paid a percent of the premium.

The diagram below shows the typical arrangement of a fronting insurance carrier to a group captive program. This type of design structure is required of nearly every workers compensation, employee benefit, professional liability and other types of insurance dominated by commercial insurers and of great consumer protection interest to regulating departments of insurance. 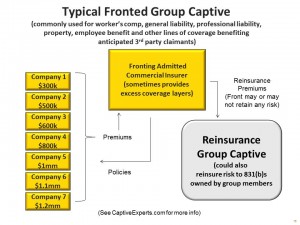 US fronting insurers are few in number. Some work on a fixed fee basis (for as little as $100,000 a year) but most require a % of premium which varies greatly depending on the associated services needed and whether or not the front retains any risk (functioning as an excess or surplus carrier to the fronted program).

Where a captive program requires fronting, the front is actually writing the insurance, and remains liable for covered claim losses whether or not the risk are fully reinsured to participating captives. Accordingly fronts often retain premiums until claims exposures are known and settled. Fronts also determine what capital and other collateral requirements are needed from participating captives entering into retrocession agreements with the fronting carrier.